Al Hedayati, Esq. is the managing attorney of Hedayati Law Group P.C. and has been practicing law in the State of New York, since 2008. Mr. Hedayati began working in the legal field as a legal assistant and a paralegal in 2003 and continued throughout his law school career, exposing him to various areas of law.

This wide spectrum of knowledge and skill equips Mr. Hedayati to represent his clients diligently and effectively. Mr. Hedayati represents clients throughout New York with exemplary knowledge in the vast areas of law which are related in many of his cases. His background and studies in banking and finance give him the arsenal to tackle complex financial issues with his divorce and family law clients. 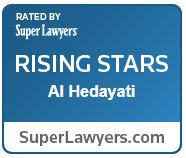 Want to know more?
Meet other members of Our Team!